Get the celebrity look: Kristen Stewart

I wish I could pull off red lipstick like Kristen Stewart here. I think its so glamorous and reminds me a bit of those pretty starlets of the 1950-s. All you’d need for the sexy sultry look is a set of false lashes, some black liner and red lipstick. Maybe a little powder.

Unfortunately for me, the red lipstick makes my pale skin look sallow and my big mouth is highlighted by the bright red. So basically I will never wear that color. But for those of you who can, I urge you to do it! Wear bright red lipstick and have fun.

I asked Stacey Ellis of Byu-Ti Salon to help detail Kristen’s look (minus the red lipstick on her front tooth). And here’s how to look like you are walking the red carpet:

Get This Red Hot Look with M.A.C Cosmetics

Face: Apply Mineralize Satin Finish Foundation with a sponge, to even out the skin tone.? Dust on the Iridescent Loose Powder on a large powder brush.

Create a warm cheek with the Powder Blush color, Pinch Me.? Apply with a medium sized powder brush.

Eyes: Start the eyes with Metal X Cream Shadow in the color, Fusion Gold.? Apply this shade to the inside corner of the eye, under the brow and blend into the darker Eye Shadow shade called Follie.

Line the eye with black Fluidline Gel Eyeliner. Apply with a fine, firm brush along the top lash line.

Plump up the lashes with two coats of Black False Lash Mascara.

Define the brows with Brow Set

Lips: Blot out the lips with foundation on a sponge then apply Hey, Sailor! lipstick in the color Red Racer. Blot then re-apply. 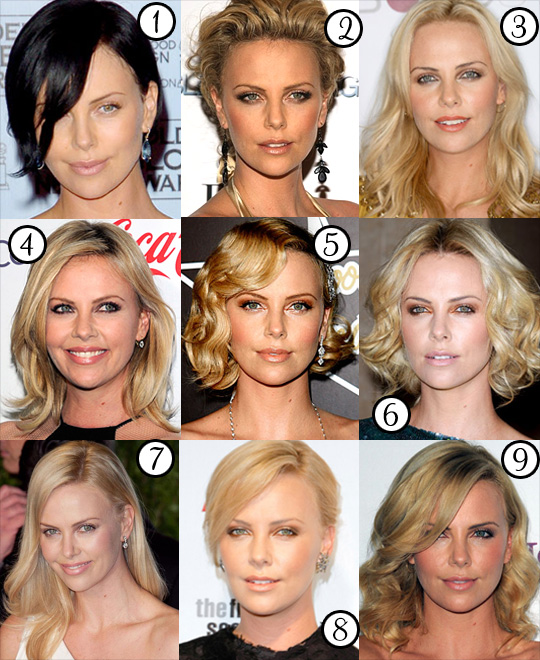 For someone so down to earth, South Africa-born Charlize Theron (born August 7, 1975) will be spending a lot of time in space this year. The Oscar winning actress plays a beautiful bureaucrat, a secretive suit who works for the nefarious company aboard the spaceship Prometheus in Ridley Scott’s upcoming Alien prequel.

But before the ship takes off on June 8, she has to contend with Snow White and her handsome huntsman first in Snow White and the Huntsman, opening June 1. In the dark retelling of the famous fairy tale, which also stars Kristen Stewart as Snow White and Chris Hemsworth as Thor the huntsman, Charlize plays the magic-mirror-consulting evil queen, who this time around doesn’t have to pull her punches for a G-rated audience.

So she’s got these two certain blockbuster movies that are gonna be in theaters at the exact same time, but that’s not all the Oscar winner’s been up to. Charlize is also a new mom, having recently adopted a baby boy named Jackson.

Now that’s a busy spring. And I don’t think I’ve ever seen her look anything less than completely put together…except for maybe her character in Monster, but that was on purpose, LOL!